Miss World 1968, the 18th Miss World pageant was held at Lyceum Theatre, London, United Kingdom on 14 November 1968. 53 contestants competed for the crown. Madeleine Hartog Bell of Peru crowned her successor Penelope Plummer of Australia. The one-time librarian from Kempsey, New South Wales, was 18 when she won the title. For two years, she was feted like royalty. She toured Vietnam with Bob Hope and, during her reign, earned up to $1,500 a day - a fortune at the time. Two years later, Penny broke her contract with the Miss World organisers to marry Michael Clarke. Today, she has three adult children. 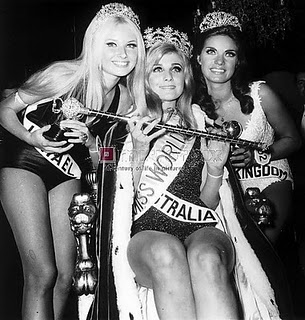